Issue date: to be conferred

The Application Permit for Contrada Giardinello is located in the South-eastern Sicily region in the provinces of Ragusa and Catania and covers an area of 380,40 Km2. 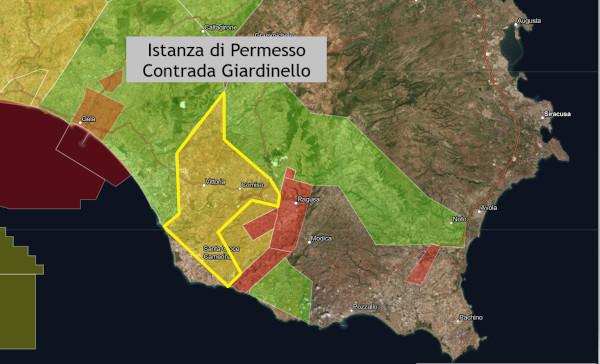 The structural and stratigraphic background and the oil potential of the Ragusa area are well known given the significant exploration activity in the area carried out since 1953 with numerous wells that have recovered and produced oil.

The main targets of the area are the fractured dolomites of the Sciacca Formation (Triassic age) which constitute the reservoirs of the Ragusa, Gela and Tresauro Fields, secondly the limestones and dolomites of the Noto Formation which currently produce oil at the Irminio field. A further target is the dolomite-limestones of the Inici, Rabbito and Buccheri Formations, mineralized by oil in various wells in South-eastern Sicily.

The geological studies carried out in the recent years and the Tresauro field discovery lead us to believe that the area has oil and gas production potential. To this end, an application for a 3D seismic survey acquisition will allow detailed studies to identify the main oil prospects.